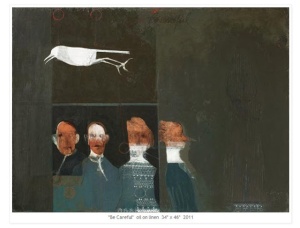 Robert Ernst Marx may live in western NY but his work reaches far beyond Rochester. His etchings, paintings, and sculptures have been exhibited in museums, galleries, and rare book rooms both here in the United States and in other countries. Marx has a BFA in painting and an MFA in printmaking. He has taught at many institutions including SUNY Brockport before he retired in 1990.

Brockport is where I met him and studied printmaking under him.Now I am an Art Librarian at the Central Library in Rochester and develop our art collection in many areas including printmaking. I have wanted to bring his work to the attention of our library patrons and to other members of the Rochester art community.  When I studied with Marx he was doing etchings with very dark backgrounds known in the etching world as an aquatint. He is now doing figurative oil paintings on linen and also doing sculpture.
Read and see more at: Robert Ernst Marx 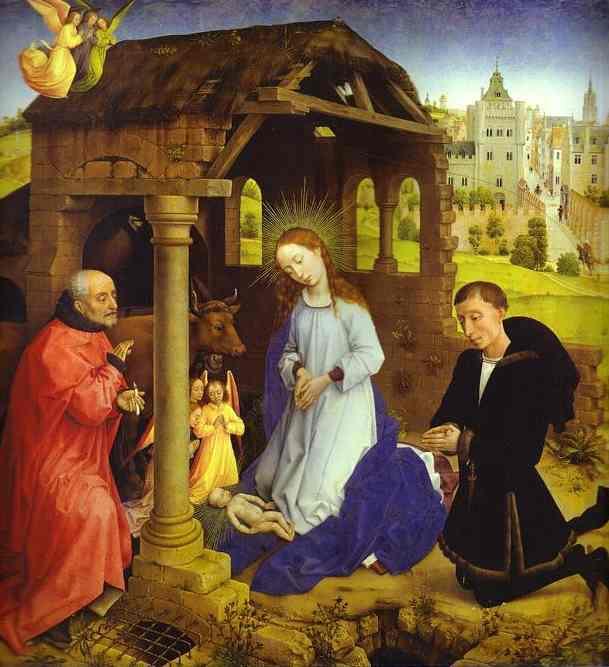 A few weeks ago I posted some images of Nativity scenes asking you to guess the artist. Here is the answer for the first image, it is a panel from the Middelburg Altarpiece by Rogier van der Weyden.
Go to the link on our blog  to see the other images.

What is it about Wyeth’s Christina’s World ? It just appears to be a simple painting of a young girl looking up towards her house.  It is one of the most recognized images in the art world, loved by many and perhaps scorned by those who don’t have an appreciation for realism. 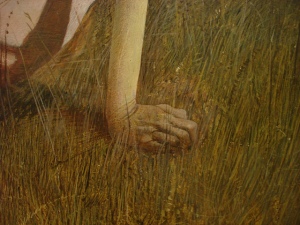 So who is the young woman gazing up towards the farm house on the hill? A new book from MoMA, Wyeth: Christina’s World, by MoMA curator Laura Hoptman explains in detail about this painting.  Hoptman writes, ” Wyeth depicted only two locations in his paintings over the course of his 70-year career: Chadds Ford, Pennsylvania, where he was born, and South Cushing, Maine, where his wife Betsy’s family owned a home. And within these two locations, he focused mainly on two families, the Kuerners in Chadds Ford and the Olsons in South Cushing.” Anna Christina Olson of South Cushing, who had a degenerative muscle condition that cost her the use of her legs by her early 30s, was the inspiration for Wyeth’s most famous painting. Wyeth explained, “The challenge to me was to do justice to her extraordinary conquest of a life which most people would consider hopeless.”

Curator Laura Hoptman’s essay is illustrated with many of Wyeth’s works and she writes about the work and places it within the context of Wyeth’s life and career.  As the art world moved onto Abstract Expressionism and then onto Pop Art, Wyeth never changed the style of how he worked. He drew criticism for being too conservative and for being too provincial as he refused to move on with the times. Hoptman’s book examines kitsch and art-world elitism that continue to surround Wyeth’s work today, long after his death in 2009.

Below are some items from the Art Division’s collection

“I prefer winter and fall, when you feel the bone structure of the landscape – the loneliness of it, the dead feeling of winter. Something waits beneath it, the whole story doesn’t show.” – Andrew Wyeth

Winter can be beautiful if you know how to imagine what waits beneath the landscape. Andrew Wyeth certainly knew how to appreciate winter. Some of his winter landscapes can be seen here. 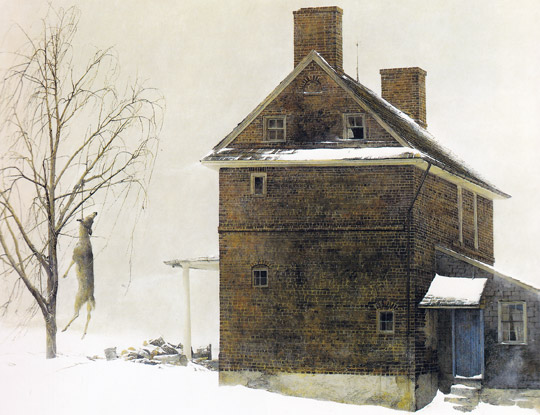 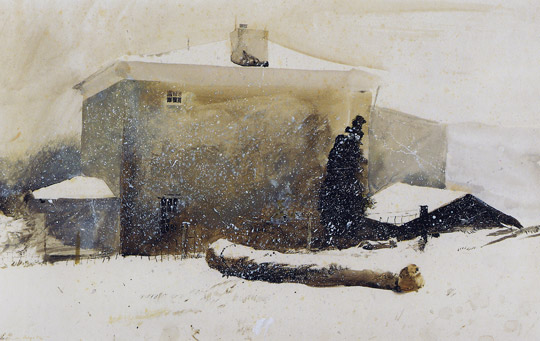 Andrew Wyeth is an American Contemporary Realist Painter,  born in Chadds Ford, Pennsylvania, on July 12, 1917. He was the second and best known of four generations of Wyeth artists. Andrew Wyeth was taught by his father, artist and illustrator N.C. Wyeth. Andrew Wyeth is father of Jamie Wyeth, third generation contemporary realist painter. He liked to paint the landscape in winter and early spring when colors are subtle and trees are bare. The colors suit his tempera palette, low-key and subdued.

One major influence, discussed at length by Wyeth himself was King Vidor’s The Big Parade. He claims to have seen the film which depicted family dynamics similar to his own, “a hundred-and-eighty-times” and believes it had the greatest influence on his work. The film’s director Vidor later made a documentary, Metaphor where he and Wyeth discuss the influence of the film on his paintings, including Winter 1946, Snow Flurries, Portrait of Ralph Kline and Afternoon Flight of a Boy up a Tree.

Read more about Andrew Wyeth at the official site  and at the Farnsworth Art Museum.

Below are some items from Central’s collection about Andrew Wyeth.

The Portland Museum of Art reopens the studio of Winslow Homer. This is the home and studio where Homer lived and worked from 1883 until his death in 1910. Workers restored the wood-walled studio’s exterior to its original colors, replaced the second-floor balcony, stabilized the foundation and replaced windows. The home will be open for public tours on Sept. 25.

If you are not familiar with the work of Winslow Homer he was a 19thc. American landscape painter and printmaker. He is considered to be one the major figures of American painting. Although he painted many American scenes he is best known for his marine paintings. 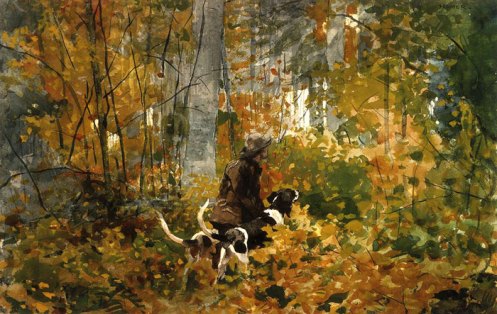 On the Trail, c. 1892, watercolor over graphite on paper, Gift of Ruth K. Henschel in memory of her husband,
Charles R. Henschel

Homer was self-taught and began as a commercial illustrator and then moved onto oil painting where he produced many landscapes before moving onto watercolor. Many of his works have become depict classic images of nineteenth-century American l life, children at play, farm girls, and hunters and their prey, yet others reflect on man’s primal relationship with his natural world.

Homer moved to Prout’s Neck, Maine in 1880 and began painting his famous images, where he captured the peacefulness of the Maine coast the ocean and the coastline. This later work is a contrast to his beginnings where he depicted the horrors of the Civil War. Homer died on September 29, 1910.

View some of Homer’s work at the National Gallery of Art .

Read up on Winslow Homer with these selections from the Art Division.

Photos from the studio in Vanity Fair. 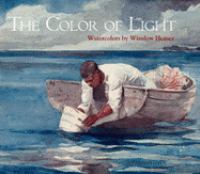 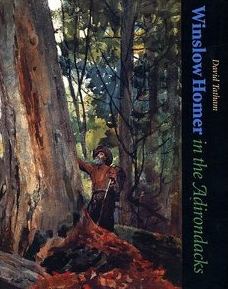 Driving around  Rochester you may have noticed some extraordinary murals that have been painted on buildings.
So if these have caught your attention and you want to know more, read on. These murals are part of a larger project, called Wall Therapy.

The first Wall Therapy project, Visual Intervention, happened July 2011.  Therefore, this year’s project will officially be known as “WALL\THERAPY, the second movement of Visual Intervention. Wall Therapy encourages local and International artists to transform neighborhoods through art. These large sometimes brightly colored murals are being painted by twelve artists, some from Rochester and others from Spain, South Africa and China.

You can view these murals in different locations around the city and at the Public Market. Public Market artist Justin Suarez says, “Doing something like this brightens up the building a little bit and it adds some beauty to an otherwise decrepit building,” and “it inspires people to take a little more pride in their community.”
You can read more about this project at RocCity News and here at Rochester Homepage. Here is a map with the mural locations.

Altered books and artist books are mediums many artists are working in today but many are not creating fore-edge paintings on books.  Fore-edge painting requires a good aptitude for painting as a scene is painted on the edges of the book’s pages.

It’s too bad  there is not much published on this fascinating method of painting but you can read about it and see it on the web site at the Rare Books Department of the Boston Public Library. This website highlights a special collection of more than 200 high-resolution images of fore-edge paintings.

A Featured Works section provides additional information about selected books, including detail shots and a video of the book as it is fanned to display the hidden artwork. Anywhere on the site, you may click on an image to view a larger version. A series of articles written by leading experts in the field, provide historical and curatorial insight into fore-edge painting.