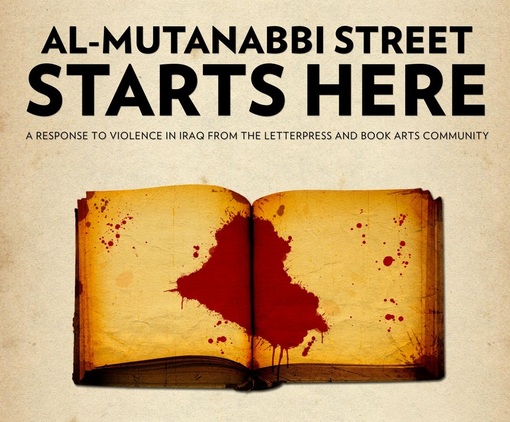 In 2014 the Central Library of Rochester and Monroe County will host an international book exhibit, “Al-Mutanabbi Street Starts Here.”, a project to memorialize much of the reading material that was lost in the car bombing of al-Mutanabbi Street in Baghdad on 5th March 2007.

The coalition handling the project, asked each Book Artist who joined the project to complete three books (or other paper material) over the course of a year, books that reflected both the strength and fragility of books, but also showed the endurance of the ideas within them. We asked for work that reflected both the targeted attack on this “street of the booksellers” as well as the ultimate futility of those who try to erase thought.

You can see some of the booksellers via the al-Mutanabbi Street Project in photos by Iraqi photographer Ghassan A. Malik.

Below you can see some images artist Scott McCarney did for the exhibit. When the exhibit arrives next year you will be able to see the book in real time.

Scott McCarney is an artist, designer, and educator based in Rochester, New York. He received formal design training at Virginia Commonwealth University (Richmond VA) in the 1970s, and earned an advanced degree in photography from the University at Buffalo/Visual Studies Workshop (Rochester NY) in the 1980s. His primary art practice has been in book form since 1980 and spans many media, from offset and digital editions to sculpture and site-specific installation. His books combine his academic background in photography and design with a love for the corporeality of craft and philosophic possibilities of sculpture. His works are widely distributed and can be found in the library collections of The Museum of Modern Art, New York; Victoria & Albert Museum, London; and Yale University Arts of the Book collection, among others. His work is shown internationally (Sao Paulo, Brazil; Melbourne, Australia; Budapest, Hungary) as well as close to home (Hallwalls, Buffalo NY; Everson Museum, Syracuse NY; Memorial Art Gallery, Rochester NY). His teaching and lecturing itinerary is varied and eclectic, carrying the banner of artists books to Australia, New Zealand, Korea, Mexico, and South America. He currently teaches in the College of Imaging Arts and Science at Rochester Institute of Technology. 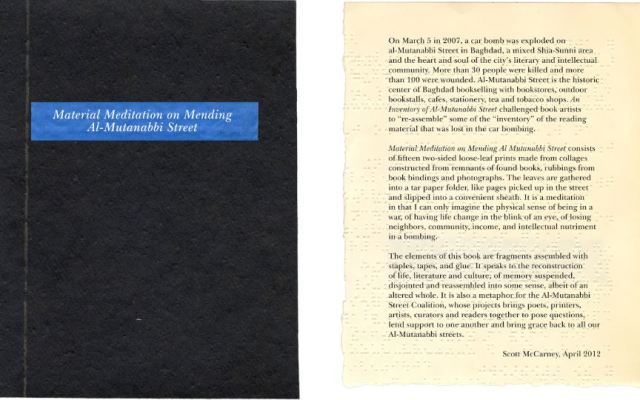 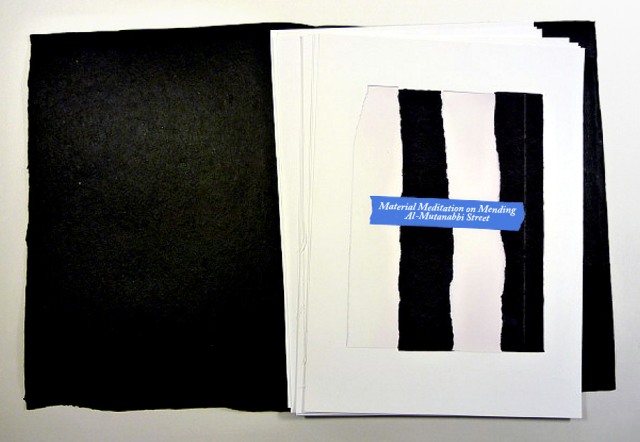 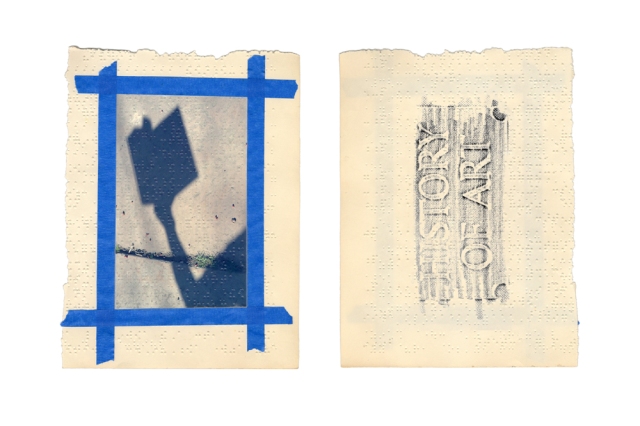 A new exhibit at the Metropolitan Museum of Art celebrates fashion, art and their love of fashion  in 19th century Paris. This exhibit  illustrates how artists such as Monet, Seurat, Degas,  and other Impressionists responded to fashion between the 1860s and mid-1880s. With both masculine and feminine attire exhibited  we see the dialogue between art and fashion of the late nineteenth-century Parisian looks that inspired art of the day.

Fashion between those years was at its most beautiful. Opulent fabrics, the corset, tiny waists, stripes, gloves, bustles, and bows, all raised femininity to its highest. This was a pivotal time period for fashion and for Paris when the city emerged as a fashion mecca.

During these years Parisians saw a radical change in their city. Broad new avenues were places to be seen and the department store came into vogue. Ready-to-wear was suddenly available and the proliferation of fashion magazines allowed urban dwellers to see what they could expect in the new shops that were opening along these boulevards. Paris was a place to be seen and with so many choices the bourgeois women might change her outfit up to eight times a day.

As women and men began to look their best artists of the time period began to paint them in their high fashions. The mood portrayed by the Impressionists was one of vibrancy and seductive beauty with tightly corseted waists and elaborate decolletes that were on display in ballrooms and at the opera. An almost party like atmosphere was on display in art at this time. That atmosphere can be seen in Monet’s painting Luncheon on the Grass and in Jean Beraud’s An Evening Soiree. 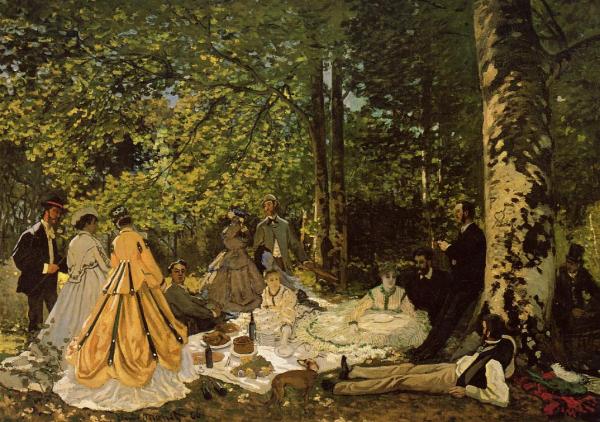 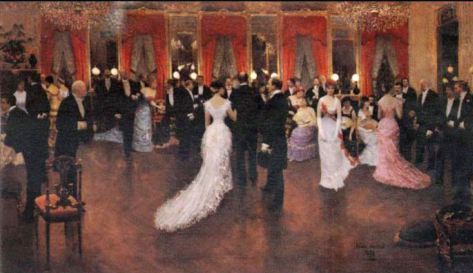 In Bartholomé’s In the Conservatory, he painted his wife standing in a sunlight conservatory wearing a tightly corseted light summer frock. This exhibit pairs Bartholomé’s this life-size portrait portrait of Prosperie de Fleury Bartholomé in her purple striped dress with the actual dress she posed in.

Artists such as Manet and Degas shared an interest in shopping and both admired seeing the man as Dandies in their dark suits or frock coats and cuffs. This look contrasted with the opulence of the female companion’s attire. Monet particularly transferred this interest into his brightly colored paintings full of women and men both smartly dressed.

Some highlights of this exhibition include Monet’s Luncheon on the Grass (1865–66) and Women in the Garden (1866), Bartholomé’s In the Conservatory(circa 1881, paired with the sitter’s dress), and Degas’s The Millinery Shop(circa 1882–86) from the Art Institute of Chicago; Renoir’s The Loge (1874) from The Courtauld Gallery, London; and Cassatt’s In the Loge (1878) from the Museum of Fine Arts, Boston.

The Art Division has a large selection books about this time period as seen below. This is just a sample sample of what we own. Click on image to access our catalog. 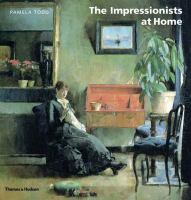 The Rochester Public Library is proud to host the traveling exhibition Pride and Passion: The African-American Baseball Experience from May 1 – June 14, 2013. This exhibit tells the story of how black baseball players from the late 19th century onward persevered through discrimination to excel at the sport they loved. Our opening reception is Sunday, May 5, 2013.